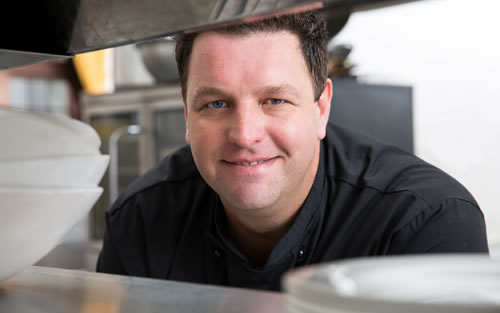 When you eat meat, do you know what you are actually consuming? Whether any growth hormones or antibiotics were administered to the livestock, or how the animal was treated?

According to Paarl-based food stylist, former restaurateur, KWV Wine Ambassador and experiential chef, Chef Mynhardt Joubert, it is extremely important that you do know – from an ethical, as well as a nutritional point of view. It is these principles that have recently convinced this Chef to sign an ambassador and endorsement partnership with Karoo-based Karusaf Lamb, a farm-to-table, integrity-lead butcher shop in Williston, focused on providing consumers with only natural, hormone-free and free range Certified Karoo Meat of Origin.

Says Joubert, “The integrity behind Karusaf made me not have to think twice about agreeing to be their ambassador. The fact that everything is completely organic – free of added growth hormones or antibiotics, and the products are entirely traceable and free range – you know exactly where it is from, makes Karusaf Lamb a fantastic product in many ways.”

As ambassador for Karusaf, Joubert will be responsible for educating consumers about the necessity of choosing organic, traceable and ethically produced meat, doing public appearances and demonstrations at selected trade events and expos, as well as developing unique recipe’s with Karusaf lamb as “hero-ingredient” for its various Social media platforms, such as “dried lamb chops” as an alternative to biltong, as well as lamb “rump steak.”

From a flavour perspective, Joubert feels there is no better meat to cook with. “The meat is of such a good quality that you have to add very little flavouring. Due to the predominant indigenous vegetation, the distinctly fragrant “Karoo-bossies”, the lambs graze on, the meat requires very little or no seasoning, as all the flavour is locked in the meat already. Apart from this, unlike with competitor products, you do not have to cook the meat for long until it goes tender.”

Joubert kick-started his career in 2013 when he co-won kykNET’s first reality cooking show Kokkedoor. After honing his restaurateur skills at Bah-Bah Blacksheep in Swartland, his personal brand grew to the point where he was appointed as Brand Ambassador for KWV, responsible for promoting the award winning wines of the Paarl based producer. Currently, he is building his repertoire as experiential chef from his home in Paarl, focusing on small, boutique functions and ambassadorships – the Karusaf Ambassadorship being the first.

Karusaf, from a small town called Williston in the Northern Cape, boasts the “Certified Karoo Meat of Origin” mark of approval, recognised by the European Union (EU), alongside another uniquely South African trademark, Rooibos.

The “Certified Karoo Meat of Origin” mark was developed by the Karoo Development Foundation to guarantee the origin of Karoo meat and protect consumers from purchasing projects marketed as being from the Karoo whilst they are in fact from elsewhere. To earn this mark, producers need to adhere to certain minimum requirements pertaining to origin, as well as to production and feeding practices.

Aligned with the certification guidelines each piece of meat is issued with a QR code, meaning you can literally trace your meat back to the farm it grazed on via a link on the website – http://www.karoomeatoforigin.com/trace-karoo-meat/

In bearing the “Certified Karoo Meat of Origin” mark, consumers who purchase Karusaf Lamb products are guaranteed that the meat is: free range; that it is guaranteed Karoo Lamb direct from the farmer; has the unique “Karoo” flavour, that the animals were free roaming on indigenous “Karoo veld,” that the meat is traceable to the farm of origin, contains no added antibiotics or hormones; guaranteed lean meat; of consistent excellent quality and that it is compliant with good stockmanship and animal welfare practices.

Says Saskia Lagner, Manager of Karusaf, “People are starting to respect the environment again. When you buy Certified Karoo Lamb, you know the product was produced under the best, most respectful circumstances, with no hormones or antibiotics being added.”

She continues, “Chef Mynhardt shares our values of organic, ethically produced, free range meat. His love for South Africa and its history, as well as his passion to cook with ingredients that are unique, wholesome, organic and exclusive, made him the obvious choice. We hope that he will bring the nostalgia of the typical “Karoo kuier” back to South African kitchens and tables, whilst simultaneously using his creativity to create new ways of utilising Karoo lamb in his unique dishes.”