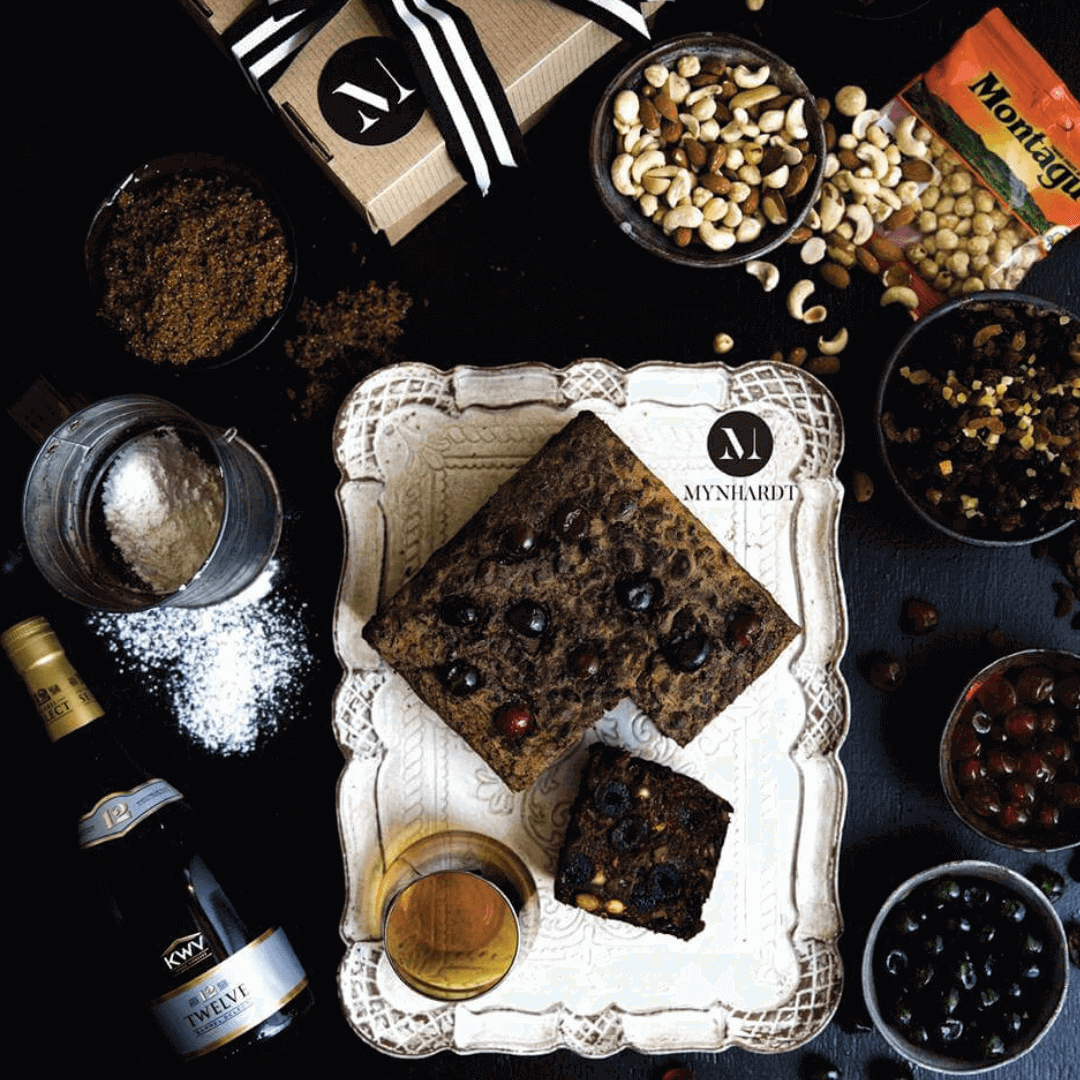 30 Oct A Free State interpretation of a festive tradition

Chef Mynhardt Joubert is honouring his tradition of baking his annual ‘Free State Fruitcake’ and has just released his first 2018 batch of these anticipated delicacies this month. This annual tradition sees Chef Mynhardt partnering with Montagu Dried Fruit and Nuts, Moir’s, Sasko and KWV Brandy in support of the Valley of Abundance project, which receives a portion of the annual fruitcake sales each year.

Fruitcake has its roots in ancient Roman times, when people prepared fruitcake, called Satura, from a mixture of barley, pomegranate seeds, nuts and honeyed wine. The English later adopted a version of this as a dried fruit cake mixture called ‘plum cake’, a traditional meal people ate on Christmas Eve to ‘line their stomachs’ after a day of fasting. The addition of spices was said to resemble those the three wise men carried on Christmas eve, and so this dried fruit mixture eventually became associated with festive seasons across the world:  today Germany has stolen, and Italy has panforte, and here, closer to home, we have Chef Mynhardt’s Free State Fruitcake.

Chef Mynhardt, who heavily draws on the memories of his mother and grandmother’s kitchens in the Eastern Free State when cooking, unsurprisingly attributes his winning recipe for his annual fruitcake to this beautiful part of the country too:  “Three years ago, my sister baked me the most delicious fruitcake – packaged in an old-fashioned cake tin – and mailed it to me all the way from Bethlehem in die Eastern Free State. I never thought much of fruitcake before then, but that special shipment changed this, and to this day, I still bake her recipe every year.”

And like those who have added their unique touch to an old festive favourite, Chef Mynhardt has his special recipe too. “Less is more,” he says, “being overly-generous with the fruit and Brandy will result in a dense, heavy and slightly sour cake. Adding too much spice like nutmeg will take away from the natural flavours of the nuts, fruit and Brandy. When you combine all the ingredients, don’t be too vigorous when you stir and mix, as this will crush the nuts and cherries and we want the cake to be filled with nice, big cherries and chunks of nuts.”

The result? A light and flavourful delicacy with just the right ratio of spice, fruit and cake, that can be enjoyed with a generous helping of ice-cream to suit our warmer festive holidays.

“Baking these cakes every year is a highlight for me,” shares Mynhardt, “for weeks my kitchen at Stasie Street in Paarl smells of spice and is a hive of activity as we line cake tins, chop nuts and dried fruit, mix and bake. It has become synonymous with reflection on the past year, and only my best wishes for 2019 accompanies each cake!”

Dedicated to act for change in his community, Mynhardt has committed to donate R30 of each cake sold to the Valley of Abundance, a Paarl Valley Initiative which links with 200 NPOs and 2000 businesses with the aim to create 20 000 jobs and have 200 000 people in foundational groups.

Chef Mynhardt’s festive fruitcakes are on sale now for R300 via cake@mynhardt.co.za or you can find them at the Festive Ideas Market taking place at Simondium’s Country Lodge from 24-28 October, situated between Paarl and Franschhoek